“Who doesn’t enjoy playing records, eh? Almost nothing beats dropping your own tracks and seeing and feeling the response”

I’ll start by telling you a little bit about myself. I know it’s a cliché, but music really is my life. I wouldn’t want to be doing anything else, which is lucky, as I probably couldn’t anyway!

I started DJ-ing when I was 13, playing the soul and disco I grew up with. Back then it was all weddings and private parties. When the second Summer of Love kicked off in ’89 it introduced me to the clubs and bars of my home town, Brighton and started my love affair with house music.

I stepped into music production in the late 90s. The first track I co-produced was an instant hit, the Platinum-selling Turn Around was the big dance tune of 1999. It’s fair to say that track launched my international DJ career, I’ve played in 85 countries, and counting. 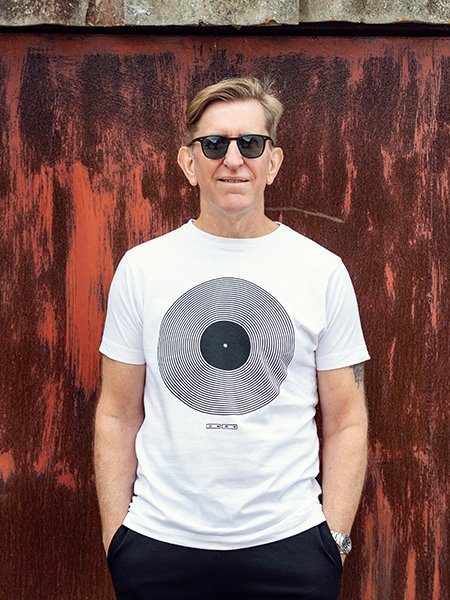 In 2004 I got together with James Wiltshire, and we created Freemasons.

From our humble bedroom studio, we took global success to another level with our first release Love On My Mind, followed by a string of singles and albums.

After taking some time out in Ibiza, I’m happy to be back home working with my studio partner DNO P.

I’m digging deep into the soul and disco I grew up with and producing fresh music fuelled by my love of house. Check out my tracks on the Music page and join me at one of my DJ gigs as listed on the Events page. Enjoy!

Phats & Small Freemasons and the future

It’s hard to find another UK artist with a career to match Russell Small. One of the UK’s original ’90s dance artists / DJ’s, his unparalleled success is still going strong three decades later.

Two blisteringly hot partnerships as Freemasons and Phats & Small, he’s racked up – 10 UK Top 20 hits, 50+ no. 1’s globally AND a Grammy nomination in 2007 for the Freemason’s remix of Beyonce’s Déjà vu.

Russell’s first co-production Turn Around became an instant hit in the UK, and much to the boy’s surprise took off all over the world. Reaching no. 2 in the UK charts it launched Russell’s career as a music producer. It kicked his DJ career into the global stratosphere.

In 2004 Russell joined forces with James Wiltshire (now F9 Audio) under the moniker – Freemasons. Their name was inspired by the pub around the corner from the studio.

Freemasons first release Love On My Mind – featuring Amanda Wilson, stormed the UK and global dance charts. It became the Freemason’s most successful dance hit in the USA and is still a massive club anthem today.

It’s hard to think of a UK dance music production partnership that surpasses what Freemasons achieved in that decade. It would be no exaggeration to say Freemasons were one of the hottest dance acts in the world. The chart hits came thick and fast – tunes like Watchin’ (2006) and Rain Down Love (2007) – and dominated dancefloors worldwide.

Their 2007 UK Dance Chart no.1 was a remake of Alanis Morrissette’s iconic ‘Uninvited’ with Bailey Tzuke providing the vocals. It was made in response to popular demand after a leaked bootleg of the original went viral. It received the seal of approval from Alanis herself when she posted it on her own official site!

That was the first of many creative productions for A-list female artists. Freemasons were in demand as the ‘go-to’ remix team producing dance versions on tracks like Kelly Rowland’s -Work. Kylie Minogue’s – The One. Whitney Houston’s – Million Dollar Bill, and Faith Evan’s – Mesmerised.

Their legendary remixes of tracks from Beyonce’s B-Day album including Déjà Vu, Beautiful Liar, Ring The Alarm and Green Light were played as the lead radio edits across Europe. Beyonce released them all in 2007 as Greenlight EP, in the same year the Freemasons remix of Déjà Vu received a Grammy nomination.

Hard-pressed to identify his favourite remix, under pressure Russell mentions two. Faith Evans Mesmerised (2005) because that’s the one which led to the Freemasons trademark style and sound. And Shine (2006), simply because it was an opportunity to work with his musical hero and legend, Luther Vandross.

The 2009 Heartbreak Made Me A Dancer, featuring the vocals of Sophie Ellis-Bexter was their 6th UK Top 20 chart hit and stayed at no. 2 of the UK dance charts for 13 weeks. Their domination of the dance scene continued with remixes for John Newman, Depeche Mode, London Grammar, Hurts, and Eurythmics.

It’s fair to say the boys had even more fun outside the studio. They played everywhere from Rio to Seoul and the epic global ‘Summer of Pride’ in 2010, when they headlined at every major Pride festival.

A decade of touring, combined with long hours in the studio was taking its toll, so in 2014 Freemasons decided to take some time out.

Russell thrives on DJ gigs and the chance to connect with people on the world’s dancefloors.

“Who doesn’t enjoy playing records, eh?” Almost nothing beats dropping your own tracks and seeing and feeling the response”.

Russell continues to tour worldwide, making regular journeys to DJ in Australia, the far-east, Russia, Europe and plays at major festivals and clubs in the UK.

With more great material due for release this year, the future is looking and sounding as good as ever for Russell Small.

This website uses cookies to improve your experience while you navigate through the website. Out of these cookies, the cookies that are categorized as necessary are stored on your browser as they are essential for the working of basic functionalities of the website. We also use third-party cookies that help us analyze and understand how you use this website. These cookies will be stored in your browser only with your consent. You also have the option to opt-out of these cookies. But opting out of some of these cookies may have an effect on your browsing experience.
Necessary Always Enabled
Necessary cookies are absolutely essential for the website to function properly. This category only includes cookies that ensures basic functionalities and security features of the website. These cookies do not store any personal information.
Non-necessary
Any cookies that may not be particularly necessary for the website to function and are used specifically to collect user personal data via analytics, ads, other embedded contents are termed as non-necessary cookies.
SAVE & ACCEPT